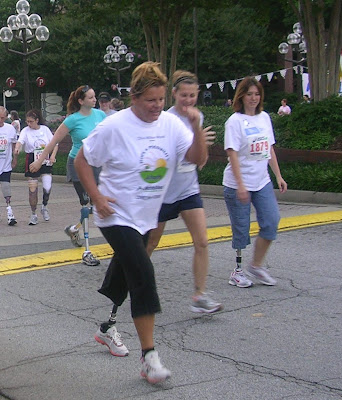 Achilles’ mission is to enable people with all types of disabilities to participate in mainstream athletics, promote personal achievement, enhance self esteem, and lower barriers, a mission Jody fully supports.

Jody, who had just learned to run on her prosthesis the day prior to the event, was nervous, but up to the challenge. “I knew a lot of the participants had done events like this before, so I was just focused on finishing the race. It really helped knowing that everyone else there was going through similar challenges that I was going through.”

“It was such a good feeling crossing the finish line, I was so proud of myself for doing what I set out to do!” said Jody.

Although this was Jody’s first time to participate in a race as an amputee, it will not be her last. Jody plans to continue to participate in events that challenge herself and her peers so she can inspire those around her and serve as

that life continues after amputation.

Keep up the great work, Jody!
Posted by Amputee and Prosthetic Center at 10:00 AM No comments: 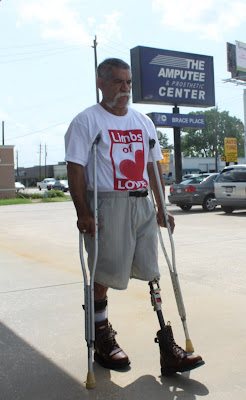 If you missed my post on Friday, you may not have know that Limbs of Love helped not one, but two amputees in need get back on their feet again! Abel Bravo and Terri French had been wheelchair bound for years, unable to obtain artificial limbs due to financial constraints and lack of insurance coverage. Seeing the hope in Abel Bravo’s eyes, knowing that he can finally go back to work and support his family after years of struggling, and watching Terri French beam with pride as she picked up her granddaughter, standing on her own two feet for the first time ever, inspires us to want to work even harder to do this over and over again for as many people as possible.

If you missed Limbs of Love on the news last night, be sure to check out the videos of these two amazing recipients. We should all be proud to say we are part of Limbs of Love, a charity that has changed so many people’s lives and will continue to do so in years to come. Way to go team!
Posted by Amputee and Prosthetic Center at 9:51 AM No comments:

Ever since TAPC was named #1 on Houston's Best Place to Work list for the second year in a row, business owners, mangers, and even competitors have asked Joe how we have managed to receive this honor not once, but twice. They think there must be some secret, and it's one I'm going to let you in on.
Yes, we have employee "Fun Days," birthdays off with pay, no interest employee loans (the list goes on...) but all of these "perks" have nothing to do with why we, as TAPC employees, feel that we are the Best Place to Work in Houston.
Being part of TAPC means you get to impact and change patients lives on a daily basis, most notably by participating in our charity, Limbs of Love. It may sound odd to you that the secret to our employees happiness is participating in a charity, but it's an incredible benefit to be able to truly give back to the patients. As Joe says, "It's the glue that holds our company together."
Each and every Limbs of Love patient has been given a new lease on life, thanks to TAPC. Many of you have had the opportunity to meet our recipients and hear their amazing stories, but there are a few of you that work tirelessly behind the scenes and never meet the people whose lives you've changed forever.
On Monday, Limbs of Love will be delivering prostheses to Terri French and Abel Bravo, two very deserving amputees. We want to give all of you the chance to be "introduced" to our Limbs of Love recipients, so please take a few minutes to read Terri French's story--it is one that will make you proud to work for the Best Place to Work in Houston!
Posted by Amputee and Prosthetic Center at 10:43 AM No comments:

How About a Round of Applause for…. 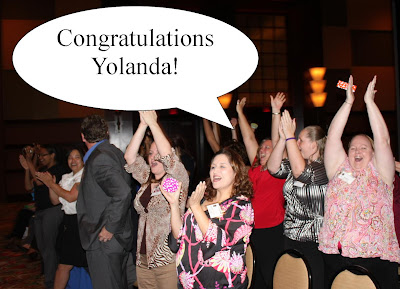 Posted by Amputee and Prosthetic Center at 2:56 PM No comments:

Prosthetics and NASA Related? Who knew! 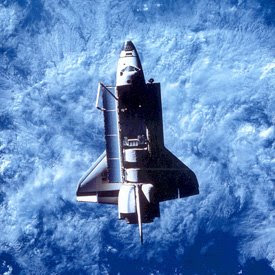 Did you know the foam insulation used to protect space shuttle’s external tank—the same insulation that fell off during Columbia’s final liftoff resulting in the shuttle’s demise—has ironically played a roll in prosthetic technology?

NASA recommended this light and virtually indestructible material to the O&P industry as an alternative to the heavy fragile plaster used for prosthetic molds. The foam is not only lighter, and more durable, but is less expensive and faster to manufacture, which financially helps O&P companies and their patients. So, in a way, NASA’s tragedy has “spun-off” to benefit amputees around the world.

If you don’t believe me, just go to the Health Museum and find out for yourself!

That’s right, the Amputee & Prosthetic Center has partnered with the Health Museum to present a “touch cart” of NASA spin-off technologies at this summer’s FACING MARS exhibit—an exhibit about the challenges humans face colonizing Mars. The Spin-off “touch cart” features different types of technology that NASA has developed that have become part of our lives (prosthetics included!)

The Amputee & Prosthetic Center donated various components and materials for educational use to the museum, so visitors have the opportunity to see and touch these materials first hand.

Aside from the “touch cart,” the exhibit features various interactive stations that encourage visitors to “walk on Mars,” test and launch rockets, “fly over” the Martian landscape and consider the implications humans face in their quest to reach Mars.

The exhibit will be on display through September 7th, so be sure to check it out—it’s guaranteed to be a fun and educational experience for the entire family (and a great way to get out of the summer heat!)

The Health Museum
1515 Hermann Drive
Houston, TX 77004
Note: Summer hours for the museum are 9 a.m. to 5 p.m., Monday through Saturday, and noon to 5 p.m. on Sunday. General Admission is $8 for adults and $6 for children ages 3-12 and senior adults. Museum members and children two years of age and under are admitted free.
Posted by Amputee and Prosthetic Center at 2:56 PM No comments: 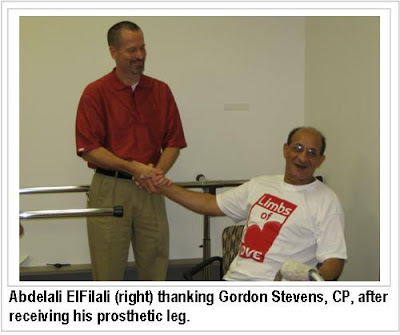 While others were out celebrating New Years day 2007, Abdelali ElFilali received the news from his doctor that would change his life forever—the infection in his leg would necessitate immediate amputation.

Abdelali had always been a hard working family man, whose primary focus in life was providing for his family and he prided himself on always being there for his family. However, following his sudden amputation the roles were reversed. Without the funds to pay for an artificial leg, Abdelali was no longer able to work, and instead of supporting his family, they were now supporting him.

"I felt like a drain upon my family," stated Abdelali. "I usually refuse to go anywhere outside of the home with my daughter because she has her two small children to take care of and I don’t want to be like a third child that she has to attend to," said Abdelali. "If you took a look at your life, how busy are you? If you had to depend on a loved one or friend to help you out with just going to the bathroom, or just taking care of simple things in life, not only has your life changed, but their life as well."

After learning about the charity Limbs of Love, Abdelali's children submitted his story to the organization, in hopes Limbs of Love could provide him with a prosthetic leg. What was unknown to Abdelali's family was that at the time, Limbs of Love was based only in Houston and had never assisted patients outside the Houston vicinity. Limbs of Love founder Joe Sansone found the story so compelling that he reached out to Dallas based Baker Orthotics & Prosthetics for help.

“Gordon Stevens of Baker O&P was immediately receptive to the idea of teaming up with Limbs of Love to give Abdelali his life back,” Sansone stated. “It’s amazing to meet people like Gordon who not only provide prosthetic limbs to patients for a profit, but are also passionate about reaching out to the amputee community.”

Upon receiving the news, Abdelali’s family was in shock. “We didn’t believe it! We were looking forward to him having a leg so he could walk again, it was like a dream come true for all of us!” said his son Rahim.

Abdelali was ecstatic about learning to walk on his new prosthesis. “We would look forward to seeing [staff at Baker O&P], they were really good, really professional people,” stated Rahim.
June 29, 2009 was an extremely emotional day for Abdelali and his entire family when he received his prosthesis—a day his family had prayed would come for so long. “It’s so emotional, we just can’t believe it! It’s amazing, it’s like he has a real leg!” said his son Rahim.

And now, with Abdelali adjusting to life back on his feet, his family struggles continue. However, now their struggle is keeping up with their once sedentary housebound loved one. “I used to always know walking in the front door, there would be my father, sitting in the same old chair, watching the same old TV, because that’s all he ever did. And just yesterday, I came home and was shocked and amazing to see that my father was not there,” stated Rahim. “I was actually quite frightened because this was such a new occurrence. I panicked until I looked through the front window and saw him outside walking in the street, playing with the grandkids. It’s so beautiful and it’s such a blessing, Limbs of Love has changed our lives forever.”

Posted by Amputee and Prosthetic Center at 6:15 AM No comments:

This week in Dallas, later this month in Pittsburg...

coming soon to a city near you!

Through the generosity of fellow practitioners, after 3 years of providing over $1,000,000 in prosthetic limbs for patients without resources in the Houston area, Limbs of Love is proud to announce its expansion to serving patients throughout the country.
We have teamed up with O and P facilities across the country to provide prosthetic limbs to those that have lost a limb but do not have the resources to pay for a prosthetic device. Currently, Limbs of Love is working with Forth Worth based Baker O&P and Pittsburgh based De La Torre O&P to provide two deserving amputees with prosthetic limbs, giving them the gift of mobility and a new lease on life. Limbs of Love not only changes the lives of amputees, but portrays the O and P industry in a positive light through the media attention generated, spotlighting those prosthetist that are truly dedicated to serving the amputee community through their involvement.

Click the picture below to see Abdelali ElFilali's story, a morrocan amputee who received a prosthetic leg Tuesday, thanks to Fort Worth based Baker O&P and Limbs of Love. 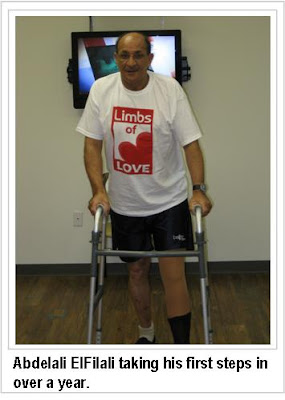 
Posted by Amputee and Prosthetic Center at 3:11 PM No comments: