Limbs of Love to provide care to Haiti earthquake victims

In the aftermath of Haiti’s earthquake, TAPC and Limbs of Love are reaching out to the over 200,000 earthquake victims who have suffered the loss of a limb in this tragedy. We are busy gathering hundreds of prosthetic components and planning a mission trip to fit those in need with limbs in the upcoming months. For those of you who missed the news coverage last week, be sure to check out the stories below:

Posted by Amputee and Prosthetic Center at 6:43 AM No comments:

In the aftermath of Haiti’s earthquake, the Amputee & Prosthetic Center (TAPC) in Houston, TX is reaching out to earthquake victims who have suffered the loss of a limb in this tragedy. The Houston company and the charity Limbs of Love are sending hundreds of prosthetic components and supplies as well as volunteering its prosthetic professionals to fit limbs on Haitian amputees in the upcoming months.

Unfortunately, due to the circumstances and lack of immediate aid, medical care has returned to that of the Civil War era. The large volume of crush injuries and fractures are oftentimes accompanied by open wounds. Lacking medical supplies and antibiotics, medical teams are forced to resort to 19th century medicine, leaving their patients with an unfortunate choice—amputation or death.

In a developing country such as Haiti, survival is difficult, and even more so for amputees. The Amputee & Prosthetic Center is committed to providing ongoing prosthetic care to amputees in hopes of giving victims a second chance.

To make donations to help provide limbs to Haitian amputees, please visit our website at http://www.myamputee.com/ or http://www.limbsoflove.com/
Posted by Amputee and Prosthetic Center at 12:39 PM No comments: 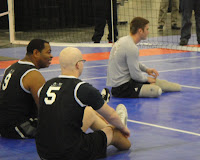 Despite the less than favorable weather Saturday, TAPC patients and employees found entertainment indoors at the Metal & Muscle Expo. The Expo introduced our wounded service men and women as well as the general public to Paralympic sports including sitting volleyball, wheelchair basketball, air gun shooting and judo for the blind. The event also featured activities such as a challenge slalom course, power soccer, amputee walking/running clinic, and much more.

TAPC patients and employees had a blast as they challenged themselves in various activities—the most popular being rock climbing. Also in attendance were a group of Wounded Warriors from Brook Army Medical Center who are looking forward to joining us as the guests of honor at our Airborne Amputee Skydive April 17th!

The event proved to be a great success and a big “Thank You” goes out to all our wonderful volunteers—for those of you unable to make it be sure to check out the pictures on the TAPC website (and mark your calendars for next year!!)
Posted by Amputee and Prosthetic Center at 2:35 PM No comments: