Restoring Hope Just in Time for the Holidays 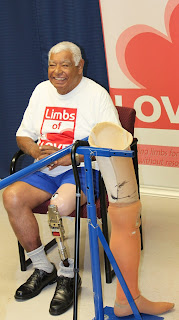 Although they have three very different stories, amputees Alejandro Osorio, Jorge Hernandez and Victor Miramon have one thing in common: they all received new limbs, and a new lease on life, thanks to Limbs of Love.

Alejandro was the first recipient to arrive at the Amputee & Prosthetic Center, and was joined by friends and family who were anxious to see their loved one take the first steps on his new prosthetic leg. Throughout the Limbs of Love process, Alejandro has been very quite and reserved, but once Rebeca Guajardo put his new leg on him (fit by Ben Falls) and he began to walk, his face brightened and he broke into a smile we had never seen before.

Alejandro’s friends and family cried tears of joy, as Alejandro smiled and laughed with each step he took. The ill-fitting leg Alejandro had been wearing cut into his skin and did not have a knee joint not only causing him pain, but making it near impossible to walk in a straight line. 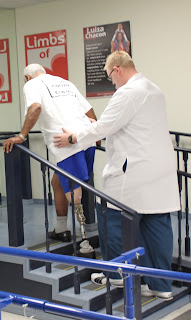 While the initial plan was for Alejandro to stay inside the parallel bars, Alejandro decided he wanted to do things differently. Alejandro left the parallel bars and headed straight for the stairs, beaming as he walked up and down stairs for the first time in years. His daughter, Patti, watched in amazement and said, “You know why he’s doing that right? Ben [Falls] showed that he can do everything with his leg, so my Dad decided he was going to be able to do everything too—I guess he decided to get started now!”

Before leaving, Alejandro’s daughters brought out a cake to celebrate and show their appreciation for giving their father his life back. After many more hugs and tears, Alejandro and his family headed out to the parking lot, where Alejandro walked up and down the sidewalk, not wanting to leave. Eventually he left, letting us know that next time we saw him he would be walking without a cane and dancing on his new leg. 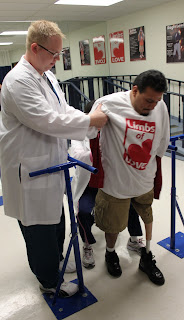 Shortly after Jorge Hernandez arrived with his mom, wife and sons, who were in shock that Jorge was about to receive a leg, freeing him from the wheelchair that he had been in ever since an accident seventeen years ago that resulted in the amputation of both of his arms and one of his legs. Once Jorge was fit with his prosthetic leg, Nick Glebowski and Rebeca helped Jorge as he took his first steps—something he had given up hope on years ago. His family cried as they imagined the possibilities for Jorge’s future. At 31, Jorge is optimistic about what’s in store, and looks forward to being able to be a whole man, father and husband again. 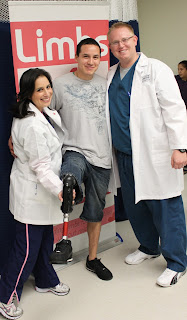 The final recipient, Victor Miramon, had been struggling with prosthesis that he received as a child. Now at 26, his leg no longer fits and he is forced to make alterations to it himself in efforts to continue participating in daily activities. His mother, sister, nephew and son all joined him as Rebeca and Nick fit him with his new leg, allowing him to live his active lifestyle without his prosthesis holding him back. Once Victor had on his new leg, he could not stop talking about what a huge difference having a leg that actually fit made—he even started jumping the parallel bars, something he could have never done with his previous prosthesis. Now that Victor has a leg that fits, he looks forward to going back to work, playing basketball with his friends and living his life without anything holding him back.
Check out Limbs of Love on Facebook for more pictures!
Posted by Amputee and Prosthetic Center at 9:48 AM No comments: 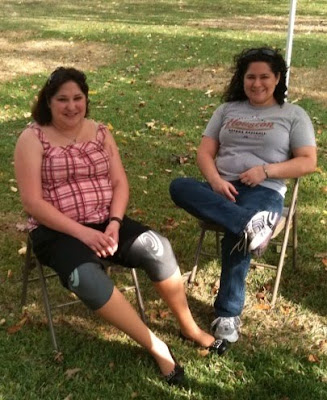 Sunday’s Limbs of Love BBQ Benefit, hosted by TAPC patient Adrienne Pena, turned out to be a great success!

Adrienne, who lost both of her legs in August of 2008, was inspired to host this benefit after seeing how amputee’s lives have been changed through Limbs of Love. Adrienne, who received her limbs through DARS, felt that hosting this benefit would allow her to reach out to the amputee community and help those who have no other place to turn.

“This is completely from her heart,” said Adrienne’s mother, Yolanda Pena.

After spending the past month collecting donations of food, drinks, raffle items, and other various supplies, Adrienne had all the details in place to ensure the event went off without a hitch. 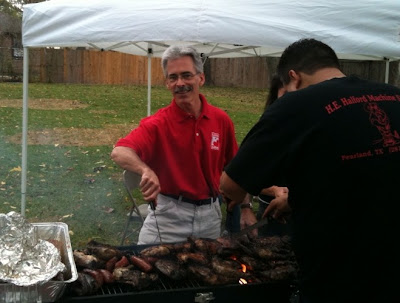 When the event kicked off at 11am, families were already lined up, ready to enjoy BBQ and support this great cause. Throughout the day we were joined by TAPC employees and their families, who came to enjoy the beautiful weather, great food and to show their support for Limbs of Love. There were even a few lucky employees that won gift baskets in the raffle! 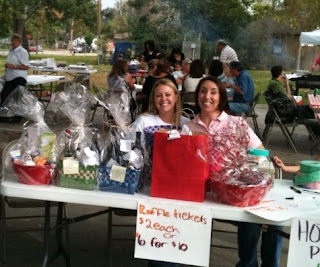 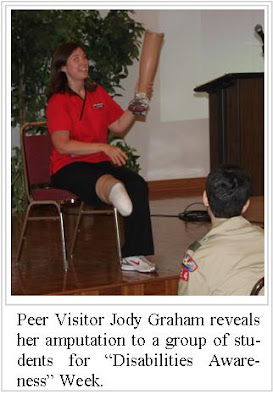 A group of curious students from David Elementary were given a behind-the-scenes look at the making of prosthetic limbs as part of a school project Tuesday afternoon.

The students, who just finished reading a book about a boy who received a prosthetic hand in the 1940’s, were touring the Amputee & Prosthetic Center to learn about modern prosthetics and hopefully have the opportunity to meet an amputee themselves.

The students viewed facility’s historical display of artificial limbs dating back to the Civil War, before entering the prosthetic lab, where they watched in awe as Prosthetic Lab Manager, Tony Caballero, demonstrated each step involved in creating modern day prosthetics, including today’s computer controlled BIONIC Limbs.

Following the demonstration, tour guide Jody Graham revealed to the class that she herself is an amputee, giving the students the opportunity to speak with her about what daily life is like and how her life has changed since her amputation.

The group was amazed as Jody demonstrated how to take her leg on and off, while explaining what her day-to-day life is like as an amputee, as well as the activities she participates in with her support group, Amputees in Action.


“I applaud teachers for what they are doing with their students. These children are not only learning about the technology developed for our wounded veterans, but they are learning to understand and therefore accept the amputee community,” said Amputee & Prosthetic Center CEO, Joe Sansone.

The students weren't the only ones enthralled in this learning experience; a group of parents accompanied the students and remained equally captivated.

“We totally enjoyed the outing and the opportunity to learn so much from you; amazing work is done [at the Amputee & Prosthetic Center]!” said chaperone Tammy Scarborough. “Your enthusiasm for what you do is certainly contagious!”


With the recent advancement in prosthetic technology as a result of the Iraqi War, students experienced the evolution of prosthetic limbs over the past century in a single afternoon.

“Prosthetic technology has made impressive strides over the past few years, and it’s amazing to see how these exciting advancements in prosthetics have generated such an interest among the general public,” stated Amputee & Prosthetic Center CEO, Joe Sansone. “We always welcome an opportunity to educate the public and look forward to seeing their A+ projects!”

Posted by Amputee and Prosthetic Center at 2:12 PM No comments: