TMC did it again!

Due to your hard work and dedication, TMC Orthopedic has earned a ranking of #3333 on the 2009 Inc. 5000 list of the fastest-growing private companies in America!

TMC's significant accomplishments have led it to be named among some of the most successful businesses in America.

Congratulations, team! This wouldn't have been possible without you!
Posted by Amputee and Prosthetic Center at 5:49 AM No comments:

WHAT YESTERDAY WOULD HAVE BEEN LIKE IF YOU WORKED
FOR AN "AVERAGE" COMPANY:

WHAT YESTERDAY WAS LIKE SINCE YOU WORK FOR
THE BEST PLACE TO WORK IN HOUSTON: 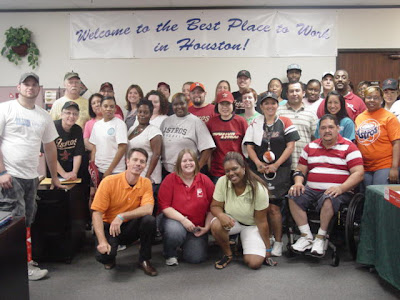 What better way to celebrate being the Best Place to Work in Houston than taking the afternoon off to go to the Astros game with co-workers, friends and family!?

Employees dressed the part, decked out in Astros gear from head-to-toe. Two lucky employees even won a day off with pay and extra money for the game for "the most spirited Astros Attire." After the costume contest, employees headed to Minute Maid Park, where they enjoyed concessions galore while rooting on our very own Houston Astros! I hope everyone had a great afternoon off (despite the fact that the Astros lost...) Days like this are just one of the many reasons that TMC & TAPC are the Best Places to Work in Houston!!

Be sure to check out the website for pictures (coming soon...)

Posted by Amputee and Prosthetic Center at 8:37 AM No comments:

Amputees in Action: Another Success! 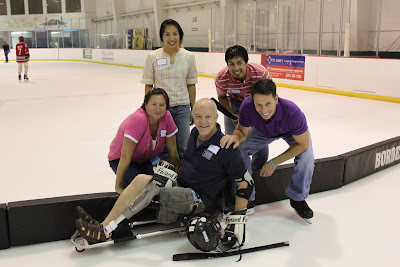 If you had asked me what sled hockey was two weeks ago, I probably would have given you a funny look and wondered what the heck you were talking about. OK, well not exactly, I have to give myself a little more credit than that, but you get my drift.

Today if you even mentioned sled hockey, I'd say "Just tell me when and where!"

If you're wondering what changed between then and now I'll tell you: it was the Amputees on Ice event hosted by Amputees in Action!

Last Saturday, Amputees in Action joined STAR Skaters for a brief support group meeting and an afternoon of sled hockey. I know we often cringe at the term "support group" due to the negative connotations associated with the term, but this was anything but your typical "support group."

Joe Sansone started off the meeting informing attendees about prosthetic parity and how amputees will be affected in the upcoming months. Peer Visitor Jody Graham then spoke on facing fears and overcoming challenges as an amputee. She shared her story of triumph and encouraged the group to push themselves to see what their bodies are capable of. 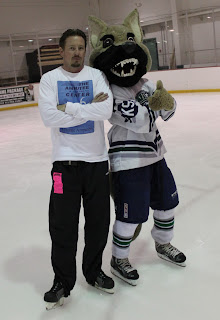 Now I have to be honest, when I first saw the STAR Skaters, they looked a little more experienced at playing ice hockey, than, oh, I don't know, say our group (minus Ryan Stelck). I was somewhat hesitant about getting on the ice with them and had a feeling a few others in attendance might have been feeling the same way I was.

After Jody finished her speech, challenging each individual to push themselves instead of sitting back and coasting through life, everyone in the room was inspired to put their bodies to the test. One of our patients, Kevin, spoke out saying he had no intentions of getting on the ice that day, but after hearing Jody's talking "how could [he] not."

Ten minutes later Kevin was on the ice, challenging himself and having the time of his life. In fact, he plans on joining the sled hockey team so he can play every weekend!

It was truly amazing to look out on the ice, seeing our patients (who were merely strangers the hour before) smiling and laughing as they overcame their fears and experienced a new found freedom on the ice with their friends they made through Amputees in Action.

As for our employees and their families, they too had a blast--just wait until you see the pictures!
Posted by Amputee and Prosthetic Center at 3:30 PM No comments:

Joe's commitment and dedication to the amputee community brought him the honor of being named the CBS Texan of the Week. Joe was recognized for changing the way the public views amputees, most notably through his charity, Limbs of Love.

CBS selects one "Texan" each week that deserves recognition based on "deeds or heroic actions worthy of acknowledgement in their community or service organization."

For the next week, CBS will be honoring Joe by airing a clip on his work with amputees on 110 radio stations across Texas. (I know what you're wondering, "What station can I hear it on in Houston?" Answer: CBS Sports radio 610)

Please join me in congratulating Joe on yet another great accomplishment!
Posted by Amputee and Prosthetic Center at 2:51 PM No comments: