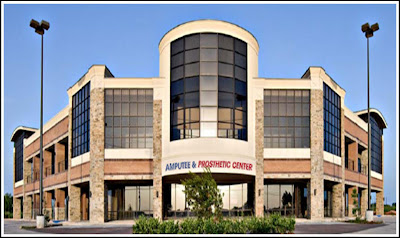 Come visit us at our new location in Southwest Houston! We are especially excited about this location because it is truly the orthotic and prosthetic office of the future. Its features include a scanning room utilizing laser CAD/CAM technology, which eliminates the need for casting and gives patients a more precise fit allowing our practitioners to better care for our patients.
The facility is designed to provide our patients with a pleasurable experience from the moment they walk through the door. The waiting room looks more like a local coffee house than a medical office, complete with two large screen TVs, a lounge area and a coffee bar, allowing patients to relax as they wait for their appointments. Patients will then be seen in a comfortable living room style setting to review their orthotic and prosthetic options.
The office not only offers comfort, but convenience. The entire facility is wired for Wi-Fi and is entirely paperless--meaning no more forms!
A special thanks goes to all those employees that helped us move, your devotion is greatly appreciated!
Posted by Amputee and Prosthetic Center at 8:59 AM No comments:

Joe is going to Haiti!

On Saturday, February 27th our very own Joe Sansone will be traveling to Haiti to make preparations for the early summer, when he will again return to Haiti with a team of TAPC prosthetists to fit limbs on amputee earthquake victims.

Although Limbs of Love primarily works with amputees in need across Texas and the U.S., it is time for us to broaden our horizons and reach out to those that need us most. 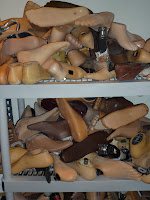 With the number of amputees growing by the day, and little to no prosthetic care available, the future looks grim for the new generation of amputees created by the recent earthquake. TMC and Limbs of Love are committed to giving a few of these survivors a new lease on life and a chance for a brighter future.

This week, the Houston Business Journal featured a front page story on our efforts in Haiti. We should all be proud to be part of an organization that changes so many lives for the better.

While Haiti continues to receive countless donations of money and man-hours from corporations and individuals, two Houston companies are contributing something quite unique.
Air Liquide USA LLC, the American wing of Paris-based Air Liquide SA, has assembled and mobilized two portable filling systems for medical oxygen, a critical necessity in short supply in the earthquake-ravaged nation.
TMC Orthopedic LLC, the largest orthopedic company in Texas, is organizing an effort to provide prosthetic limbs for thousands of amputees. Read more....

Posted by Amputee and Prosthetic Center at 8:10 AM No comments:

During the Thanksgiving Holidays, Univision documented the lives of three amputees, who, despite missing their limbs, were grateful for the lives they had been blessed with. We watched these three amputees struggle performing simple daily activities that most people take for granted due to the lack of or ill-fitting prosthetic devices.


Tonight and tomorrow at 10:00pm, Univision will be revisiting these three amputees’ stories, showing how their lives have been changed for the better through the donation of prosthetic devices from Limbs of Love.
Posted by Amputee and Prosthetic Center at 1:38 PM No comments: 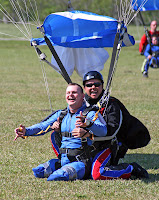 I just returned from a visit at the Center for the Intrepid at Brooke Army Medical base in San Antonio where I went to invite the Wounded Warriors that had lost their limbs in their service to our country to be the guests of honor at the 3rd Annual Airborne Amputee Jump.

Upon arriving there was a group of 15 or so Wounded Warrior amputees participating in a game of sitting volleyball—a sport played just like the standing game except for a lower net, smaller court and sitting players. Just watching these guys play this game was a true testament to the spirit and fortitude of our Wounded Warriors.

As I approached the group of young men, primarily in their early 20s, I

noticed that they were all missing limbs—some missing one leg, some missing both, and others missing an arm. After a few moments in their presence, surrounded by competitive jeers and trash talking, I quickly forgot that these athletes were amputees or even Wounded Warriors. They were just a group of competitive guys playing a so called “meaningless” game of volleyball. I couldn’t imagine a different atmosphere in the locker room at half time during a NFL Super Bowl Game.

These guys have given their limbs for our country and they will be forced to live the rest of their lives as an amputee. But you’d never know it in their attitude. It is fitting that we do what we can to ease their pain and aid in their rehabilitation. Entertaining them and allowing them to go out of town with their families will be a well deserved break for them. Jumping our of an airplane will allow these guys to make a statement to the world that life as an amputee is OK and they are capable of doing incredible feats.


I am invigorated after watching these guys. The hard work that you put into the upcoming months with likely affect these American heroes for the rest of their lives—some will leave with unforgettable memories and for others, it will be a truly life-changing event that will give them the confidence to live the life they always dreamed of, despite the cards they have been dealt. It is an honor to have these young men join us for this event, and I want to thank you again for helping Limbs of Love give back to those that have sacrificed so much for all of us.
.
.
For more information on Airborne Amputees, please visit http://www.airborneamputee.com/ or email mbonham@tmcortho.com
.
Posted by Amputee and Prosthetic Center at 7:18 AM No comments: