Today at the Houston Fast 100 awards ceremony, 840 of 850 business men and women had lunch before Amputee & Prosthetic Center CEO Joe Sansone. That's because the winners were counted down from 100, and TAPC was named the #10 fastest growing company in Houston! 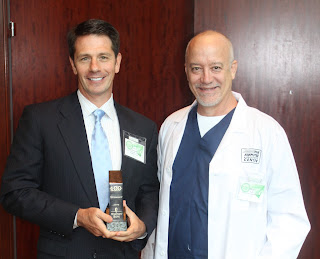 The Houston Business Journal ranked the Amputee & Prosthetic Center (TAPC) # 10 on the Houston Fast 100, an exclusive ranking of Houston’s fastest growing businesses. Businesses were ranked according to their past two-year growth and were required to be headquartered in the Houston area and be at least five-years-old.

Joe Sansone, CEO of TAPC, attributes the company’s success to it’s commitment to patients and revolutionary approach to amputee care.

“We were so surprised to be named in the top ten on Houston Fast 100 list,” said Sansone. “It’s a testament to the tremendous growth and success that we have achieved over the past five years, but even more so a testament to how dedicated our team is to delivering the best in prosthetic care. Going above and beyond by advocating for our amputee patients is what our company strives for."

Although TAPC’s parent company, TMC Orthopedic, has been named on the Houston 100 and Small Business 100 an unprecedented six times, this was the first year TAPC has been eligible for the Houston 100.

TAPC was created in 2004 when Sansone realized the lack of quality prosthetic care available to the amputee community. Since 2004, the Amputee & Prosthetic Center has developed a multitude of innovative programs that have thrusted the company into the national spotlight. Thanks to the glowing accolades from patients and physicians alike, the number of new patients has quickly increased, and as a result, revenues have increased 217.4% over a two year period.

TAPC’s achievements reach beyond revenue growth, as they have encountered more success in the past five years than most companies do in their entire existence. TAPC was named #1 on the Houston Best Places to Work List for 2008 and 2009 and has received multiple honors for its dedication to the amputee community, most notably through its charity Limbs of Love, which has provided over $1 million in prosthetic devices to amputees that would otherwise go without.

“The Amputee & Prosthetic Center was built on a team of dedicated, hard-working people that love what they do,” said Sansone. “The Houston Fast 100 ranking is well-deserved recognition and I am proud of the entire organization for this achievement. We plan to keep our focus on developing new programs to better the lives of our patients, making the future look bright not only for TAPC, but the amputee community as a whole.”
Posted by Amputee and Prosthetic Center at 9:41 AM